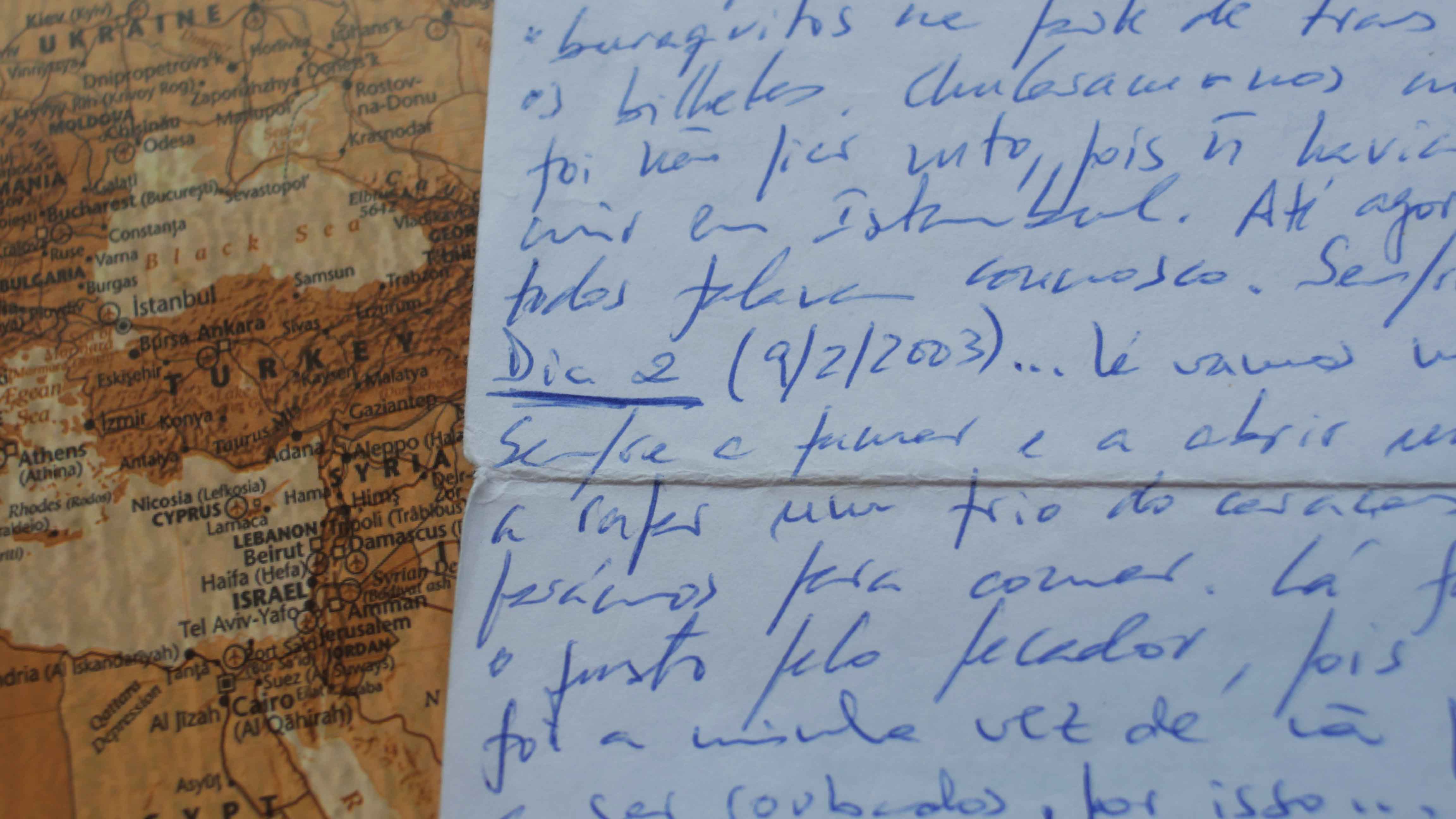 – From Istanbul to Nevşehir –

Here we are on our little bus, with people smoking all the time and opening some windows on the roof. It was another journey freezing to death and intoxicating with the smoke. We stopped to eat on the way. I went to get two burgers and this time, the just paid for the sinner, because I was robbed before and this was my turn not to pay. If I had paid, we would have been robbed again, so…

We arrived in Nevşehir in the morning and walked around looking for the cheapest room – this was in Göreme, 11km away – and we would tell the owners we would come back, giving the excuse that Marcelo would go and meet some friends at another hotel.

We got a room for 6 million each. Then we went looking for a restaurant and found one with 10% discount. I never thought we could be so cheap, but I learned from other trips and this is just the beginning. Afterwards we walked around where Star Trek was filmed. It’s amazing! In the afternoon, we got a lift from a woman to Uchisar and came back. We went to bed early because we were burnt out.

We woke up at 10:00 and had a shower, supposedly there should be hot water but it was worse than the worse at Delta, the student residency where we lived in back in Greece. Then we got a ride to Nevşehir. From there, we got on a bus to Derinkuyu and went to see an underground city with 8 levels, it was amazing! 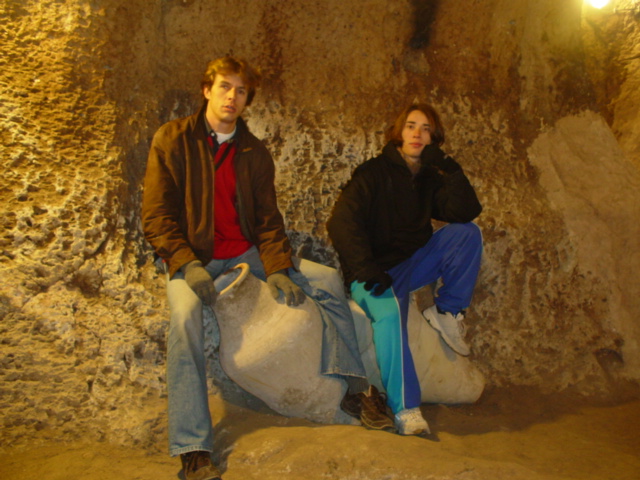 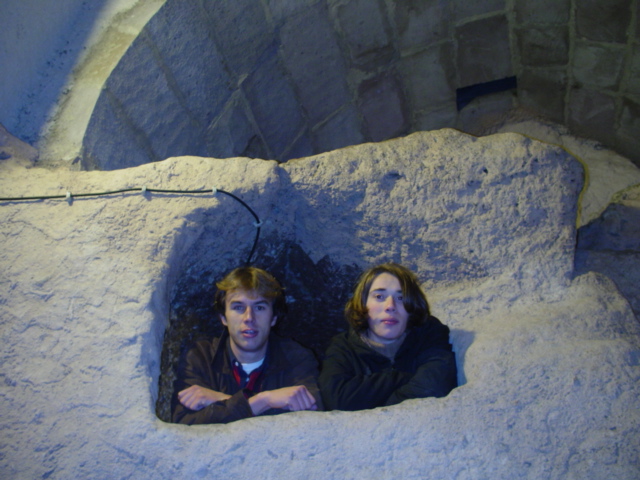 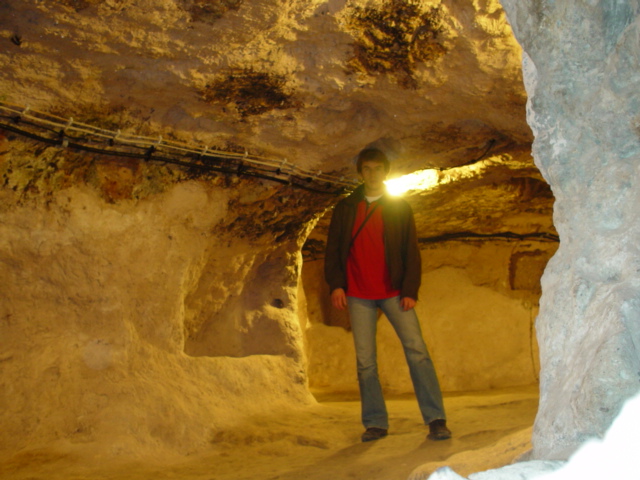 On the way back, we caught a snow storm in Nevşehir. 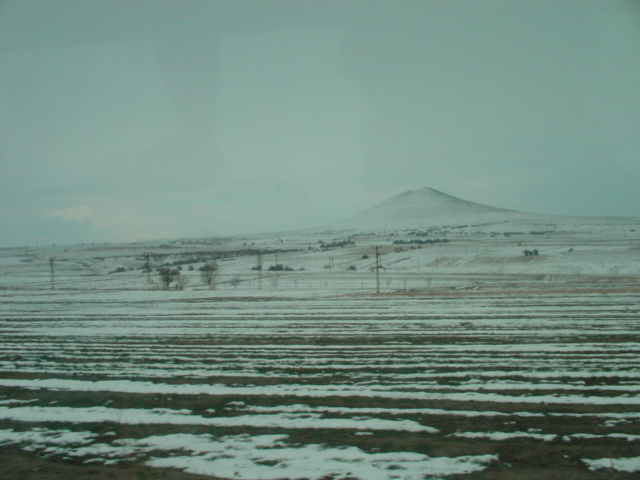 Back to Göreme, we caught a small nine seater bus, but there were twenty-four of us and when I thought it impossible to fit anyone else in, an old fat lady entered and then another man. When we were still in Mevshir we went to grab a bite to eat – gyros, it was cheap – and we made friends with the guys who worked there. The chef only spoke two or three words of English but we had a great chat. We talked about the war, currencies and European economy. He said that the Portuguese were cool, just like most of the Europeans, Iraqis and Syrians, but that he didn’t like the French or the German. He sided more with the Greeks, Armenians, Milosevic, Russians and all of those from the ex-soviet republic finished in vain. At the end, we even took a photo with them and they sent us off with a big farewell, with one of their mothers kissing Marcelo. We brought back their address to send them a postcard. Afterwards we got some bread for cheap to eat during our journey to Autakia, close to the Syrian border.

We got on the bus – it looked like Las Vegas at night – and got cosy in the back seat so we could lie down. A kid who worked there immediately showed up and made us go to our seats, even though there were only another seven people. It was a luxury bus, the best we traveled in.

We just arrived in Kayseri and we have to wait two and a half hours for the connection bus. As usual, there comes the tea, for free, just like in all of Turkey.

It’s almost midnight and I thought the day was over, mas the old man at the station wanted to sell us a woman – nothing special, some would take her – for 1 million euros. After a long discussion, in turkish, we managed a trade: this one for free and Marcelo would find her one in Portugal. The man was called Oman and the woman Leyla.

The bus is coming and so is the fourth day.